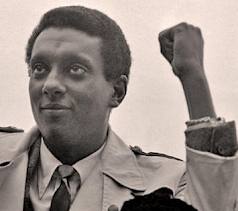 In 1966 Stokely Carmichael was in Greenwood Miss. speaking in support of Protesters marching in place of a wounded James Meredith. When he was setting up camp in Greenwood he was arrested. After being released he exclaimed, “This is the 27th time, we been saying 'Freedom' for six years,'' he continued, referring to the chant that movement protesters used as they stood up to racist politicians and hostile policemen pointing water hoses and unleashing snarling dogs. ''What we are going to start saying now is 'Black Power!’” The phrase would catch on and ignite controversy. It troubled some members of the black community because some thought it sound anti-white and the phrase was tagged as “reverse racism”.

In 1967 Stokely Carmichael and Charles Hamilton published the book Black Power: The politics of Liberation in America. The book proposed:

A political framework and ideology which represent[ed] the last reasonable opportunity for this society to work out its racial problems short of prolonged destructive guerilla warfare. That such violent warfare may be unavoidable is not herein denied. But if there is the slightest chance to avoid it, the politics of Black Power as described in this book is seen as the only viable hope.

The Black Power Movement sought to achieve equal rights and maintain black culture, in other words to live as equals but not assimilate into white America. Black Power leaders intended to consolidate black liberation efforts to build community programs and develop black leadership so that black culture could develop to its full potential. The Black Power movement distinguished itself from the non-violent elements of Civil Rights by recognizing the advantages of violent retaliation and preparation for a race war.